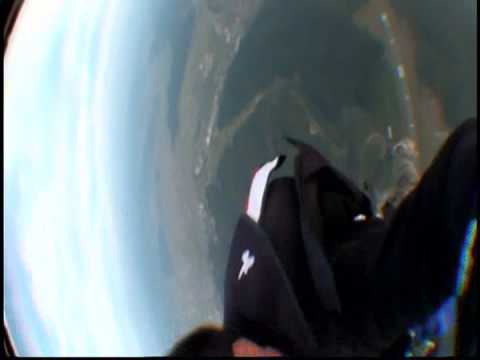 When I look down from a 10-story building rooftop I know if I fall down I will just die, full stop. However, strangely enough, thought of death did not cross my mind when I was flying in a door-less plane and gazing outside. Yes, they didn’t even bother to have a door in that plane! There was just a hole to get in and out, but nothing to shut or open. Crazy people would jump off from this plane anyway, why bother?! It was an out of this world crazy thing. When I looked down from 4,000 meter, everything looked so calm and quiet. The birds were flying lazily, clouds were floating calmly, tiny cars and buses far below were moving slowly, like an army of ants. It was a peaceful atmosphere all around. How could I die?

Then I dived. There was no going back, just going downward. In the course of next couple of minutes, my life would have one of the Boolean values. TRUE: Still Alive, FALSE: Dead. I was free-falling at 194 km/hour speed. Have you ever seen a car racing at 194 km/hour? I had that speed, but on Y axis.

During the training session, my instructor told me countless number of times; before the jump grip your harness tightly, then after the jump, when I pat on your shoulder three times, leave the harness and extend your hands like a flying bird. Before the jump, I gripped my harness tightly, then after the jump, I forgot everything. He was relentlessly patting on my shoulder and I was thinking, do you really have to do this now, before I finally realized oh shit I am supposed to extend my hands.

Free-falling lasted for 54 seconds, the best 54 seconds of my life. But even in that 54 seconds, the best part was the first 4 or 5 seconds. After the jump, I flipped in 360 degree for twice! What a moment that was! Actually 54 seconds was quite a bit of time. After first 10 seconds or so, I got over the initial shock and started to enjoy the experience. In the video you can see how the wind was distorting my face. That blow of wind was the only thing getting in my way of enjoying that epic moment of life. Then I decided to face it, literally.

There was a bird’s eye view of mountain range and sea, and above of all, there was that experience of free-falling at 194 km/hour speed, literally facing face-distorting nasty blow of wind. The earth below was zooming in, like zooming in Google earth. Gravity. In physics I studied g = 9.80665 m/s2. In skydiving I felt g = 9.80665 m/s2. I wanted to keep falling like that forever, or perhaps for 1 more minute, 1 more minute would have been feel like forever, I had no sense of time, What was time? Who was Einstein? What was I even thinking about? Did I get crazy? Absolutely.

Suddenly parachute opened and pulled me few meters upward. Then there was silence. Absolute silence. I was just floating in the air. My instructor asked me if I was OK. I assured him. What the heck had I just done with my life?

The rest of it was pretty nice, floating in the air with parachute while enjoying the awesome view of earth and sky. Everything was under control and soothing. The extreme excitement of my life just had ended. In the next few minutes time, I landed, safely.

So, did that experience change my life? On my way to skydiving center, the taxi driver told me he knew of a guy who skydived once at the same skydiving center where I was heading to. Before skydiving that guy used to have a miserable life, he was struggling at his work and in his personal life. But after skydiving his life had changed.

Unfortunately, except my Facebook cover page, nothing else has changed in my life significantly after skydiving. People might think I became braver after skydiving. Not at all. At our office, we have to give a three minute speech once a month. I still hide my hands during that monthly speech, because they shiver. For me the fear of public speaking is still far more severe than skydiving.

The thing that drove me to Skydiving was sheer curiosity. I am an overly curious person. I just wanted to know how it feels to Skydive. A FAQ I have been being asked since the day I Skydived, how did you overcome fear? With all the honesty in the world I am saying, I was not scared. It surprises me too, why I wasn’t scared? Perhaps because I have endless trust in Japanese safety? I don’t think there are too many countries in the world who care about safety like Japan does. If I died that day, it would have meant I was destined to die that day :-S I know it does not make much sense and perhaps you are thinking what the hell this guy is talking about! But trust, belief these phenomenons are always like this. We cannot express/explain them with words or algorithms.

Another FAQ I have been being asked lately a lot, what’s next? I don’t know and I don’t plan. I am not saying not planning is a good thing, but I just don’t. I don’t want my curiosity to become a burden for me. However, I wish I could do wingsuit flying someday. I wish I could experience zero gravity someday. But they are not in my bucket list. In fact I don’t have a bucket list. However, I am always ready. The other day I met someone who does kickboxing. In a week time I ended up learning kickboxing at a kickboxing center. It’s just like that. I am always ready. If there is a new thing, I will go for it without thinking about return, consequence and stuff like that. Is there anything new you want to go after?